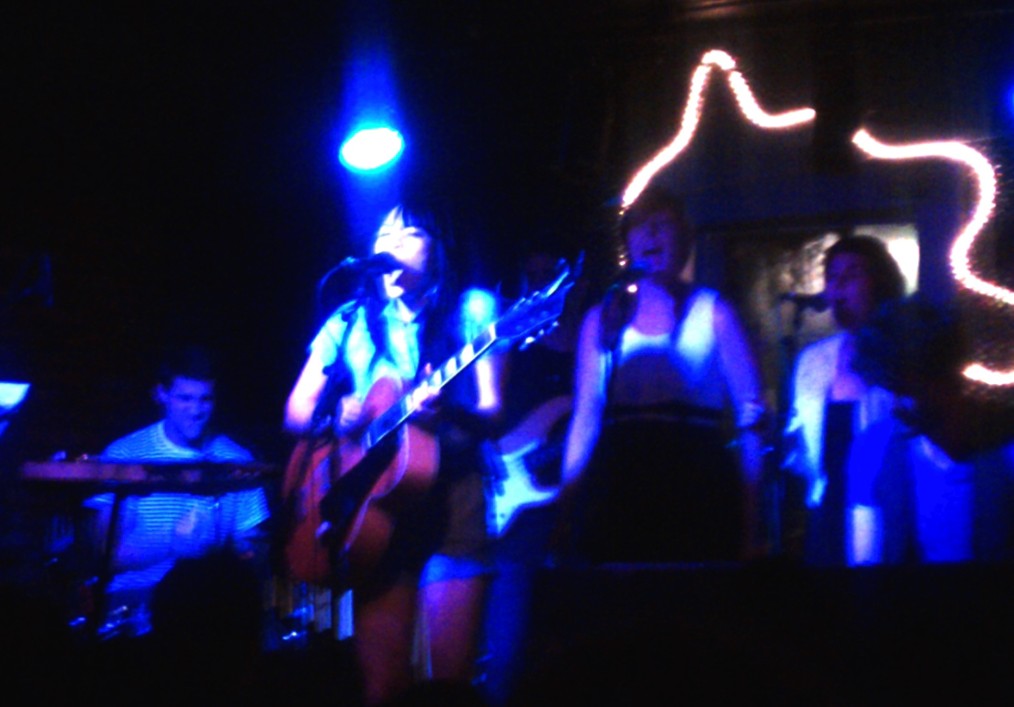 Better Than: Every live performance Thao has given to date

If anything is left standing at Bottom of the Hill after last night’s Noise Pop festival performance, it is certainly by the good graces of powerhouse indie songstress, Thao Nguyen. With a new band and edgier demeanor, Nguyen decimated last night’s performance with magnificent velocity.

The show was destined to make waves when it sold out a week prior to performance, in no small way influenced by the ingénue’s work outside of her band. Nguyen is known for lobbying government officials on behalf of musicians and works to benefit domestic violence shelters and sexual abuse counseling services.

She delved into film composition last year, providing the score for American Teacher, a documentary on our educational system. Nguyen has also written scores for WNYC’s Radiolab podcast and is set to perform in its latest round of touring shows.

This past December, she brushed elbows with the Portlandia crew (Fred Armisen and Carrie Brownstein), performing a cover of Salt-N-Pepa’s Push It.

Still, celebrity ascent aside, last night promised the same subdued, red dirt, guitar-heavy collective we have come to recognize as the Thao Nguyen sound. We all expected the same lyrical simplicity and child-like vulnerability that has often cast comparisons to Cat Power. Well, my friends, Cat Power is dead; and in her place, a hissing, yowling hellfire sex kitten.

Last night, clad in a denim jumper, thwacking her jet black hair about smoldering eyes, Ngyuen taunted, “Will you be off, be on, and be out of my sight?”  (Three songs later she broke into a cover of Ludacris’ What’s your Fantasy.)

There were signs. Know Better, Learn Faster released in 2009 was a propulsive, raw, and angst-frayed post break-up production. Its songs were hopeless tomes cheaply marinated in a sauce pop music. Live performances took on an increasingly strained feel—what hindsight calls artistic growth. Nearly three years later, and now deeply embedded in work on a new album, we find that a once broken inner child has emerged a fighter.

The new tracks performed last night thrashed together Nguyen’s countrified sound with elements of blues rock, gospel, and R&B. The result, exemplified in So Neck and Move, rests along the lines of R.L Burnside and Lou Reed Live.

The performance aspects of these new tracks are no less spectacular. New instrumentation and a smattering of fresh band mates, gave way to flourishes of Mr. Dynamite himself, James Brown.

“Baby, I was on your conscience, you were only on my mind,” Nguyen exploded; and later, took a swig of Jameson and thanked the crowd for indulging her.

The audience couldn’t be happier united under Nguyen’s thumb. It had been tied together all evening without a leader at its helm. The lo-fi offerings of opening performers Bird by Snow and Garrett Pierce hadn’t even warranted its attention (which both artists took in great professional stride).

Co-headliner John Vanderslice proved a worthy adversary. Dressed in a “Danielle Vanderslice 2004” t-shirt, the troubadour presented an intimate, ruminative, and experimental sampling of his vast repertoire. Vanderslice was as earnest and approachable as ever, but this did little to assuage the audience—which, on the whole, was more fascinated by its own self-importance to be bothered to show the artist the respect he deserved.

No, the spotlight truly, and justifiably, belonged to Thao. The new Nguyen was a temptress slicked in thick garters of self-assuredness—a testament to resilience and the transformative powers of the will. It is no small feat suffering heartbreak while finding the means to stay positive, grow, and give to others. If last night proved anything, it’s that we’re all capable of making such waves, but this one belonged to one bad ass bitch—and her name is Thao.

Encore: If You Were Mine (R. Charles)

“Fuck, I missed the end. I was so close,” said John Vanderslice after performing Plymouth Rock. “I won’t be able to sleep tonight if I don’t complete this.” (He then went on to repeat the final measures of the song with perfect execution.)